Protecting wind turbine blades from the damage caused by the outside elements with our innovative Virtual Feathering technology.

Protect wind turbine blades with Air Edge® through two significant benefits. Firstly, prevent damage caused by the outside elements with our innovative Virtual Feathering technology that protects blades for a longer lifespan. Secondly, reduce the risk of downtime in adverse weather by using heated air pumped through nozzles and pipes in the system to prevent turbines from freezing. nd pipes across the wind turbine blades to create a protective air layer over the blade’s surface. This sheet of air creates a cushioning effect. The protective air layer can help protect the surface of the blade from erosion and surface damage caused by abrasive elements and harsh weather conditions such as hail, snow, and rain.

Ogab®’s innovative system works by utilising custom-designed air nozzles and pipes across the wind turbine blades to create a protective air layer over the blade’s surface. This sheet of air creates a cushioning effect. The protective air layer can help protect the surface of the blade from erosion and surface damage caused by abrasive elements and harsh weather conditions such as hail, snow, and rain.

This air cushion not only protects against erosion, helping to prolong the lifespan of the blades and reduce maintenance and downtime, but on-demand warm airflow from the nozzles also helps the blades to maintain temperature to prevent the turbine from freezing and shutting down in extreme weather conditions.

Wind turbines often suffer from severe, leading edge erosion after being in service for a period of time. Such erosion has escalated the concerns about the reliability of the wind turbines in relation to their operation in the long term.

Leading edge erosion also causes performance deterioration and additional maintenance costs. Furthermore, it also results in a substantial increase in the blade’s surface roughness. Subsequently, this affects the aerodynamics of the flow around the blades, which has a detrimental effect on the wind turbine’s efficiency. 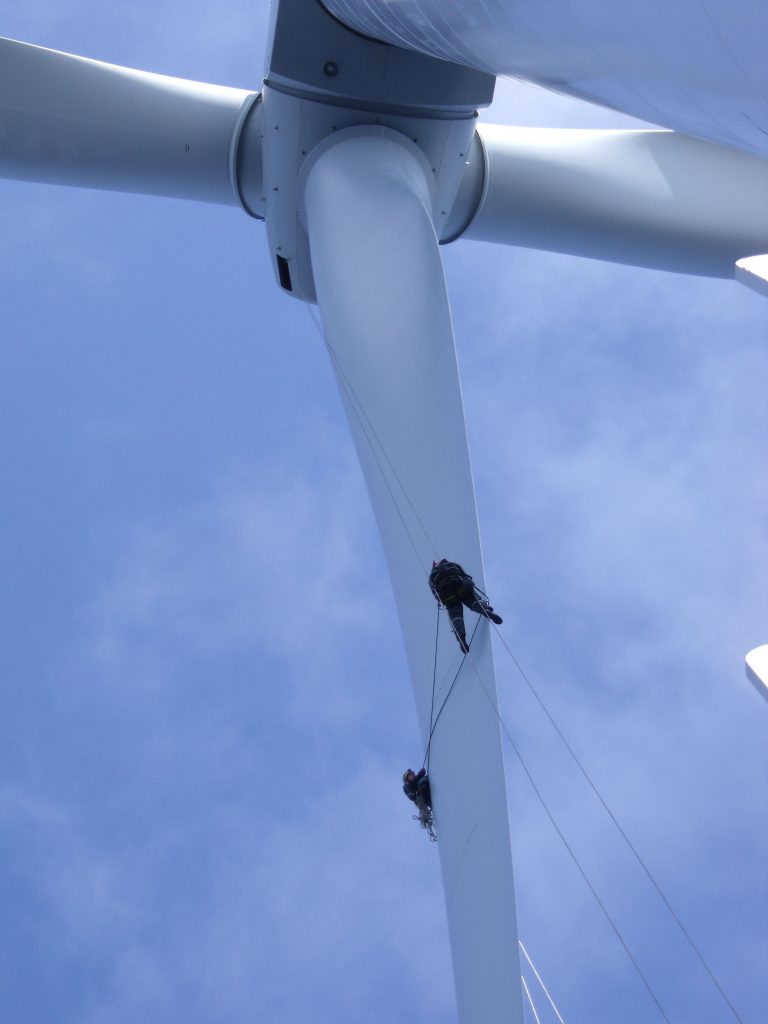 It has been reported that heavily eroded wind turbine blades can decrease the annual energy production by up to 5% in an industrial scale wind turbine. This phenomenon originates from the nature of the harsh environment that the wind turbines operate in.

Although the rotational speed of the wind turbines is not significant, due to their very long blades, their tip speeds are extremely high (in the range of 190-290 km/hr). This means that the collisions between rain droplets and blades are excessively abrasive. It’s not just leading edge erosion that reduces efficiency but also dielectric charges that lead to greater lightning damage as well as other aspects of wear and tear. 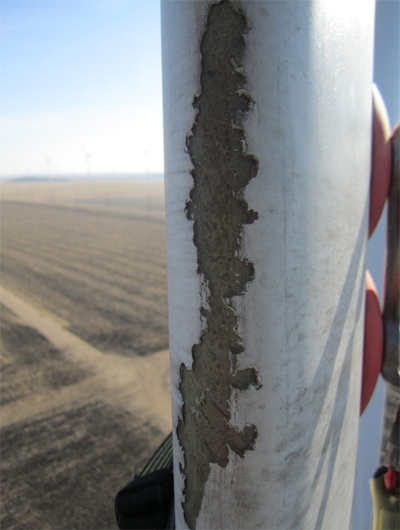 How Air Edge® Can Help

Using Ogab®’s breakthrough Air Edge® technology, it is possible to significantly reduce the concerns of leading edge erosion using our Virtual Feathering protection. By focusing on lessening erosion, we can help to increase the lifespan of wind turbines while also:

The iced turbines had to wait until the storm had passed before they could function as normal.

To ensure consistent energy production and power output, turbines need to function in a range of weather conditions. Ogab®’s Air Edge® technology can help to ensure the power output of turbines during freezing conditions thanks to its innovative heating system.

The Air Edge® technology features Virtual Feathering, which utilises air nozzles and pipes throughout the system, which can provide warm air on demand to help maintain the temperature in the turbine. This prevents the turbines from freezing, even in the most extreme of weather conditions.

As wind energy continues to grow, it is essential to ensure a consistent power output. When significant power outages occur, they can have far-reaching effects.

For example, during the February 2021 winter storm in Texas, more than two million homes and businesses suffered from a power outage, affecting more than five million people. For some, this power outage lasted for several days. When you consider the far-reaching concerns of outages – from human health to the economy – minimising the risk of power outages becomes essential for all forms of energy production, including wind energy.

It is estimated that the Texas winter storm caused losses and damages of around $195 billion. Considering the cost from this, sustainable solutions such as Air Edge® can help to protect not only human health for the end-user but also mitigate potential losses. 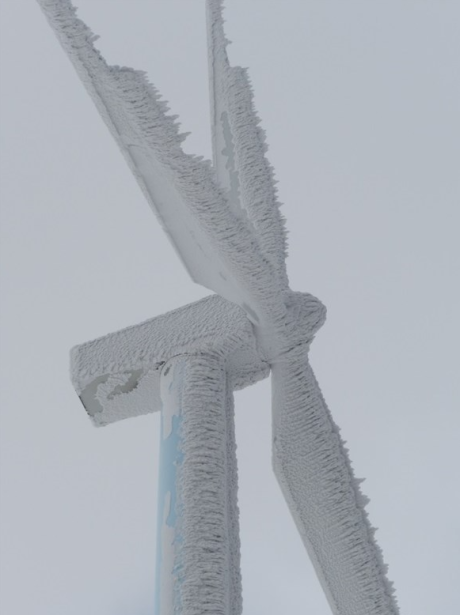 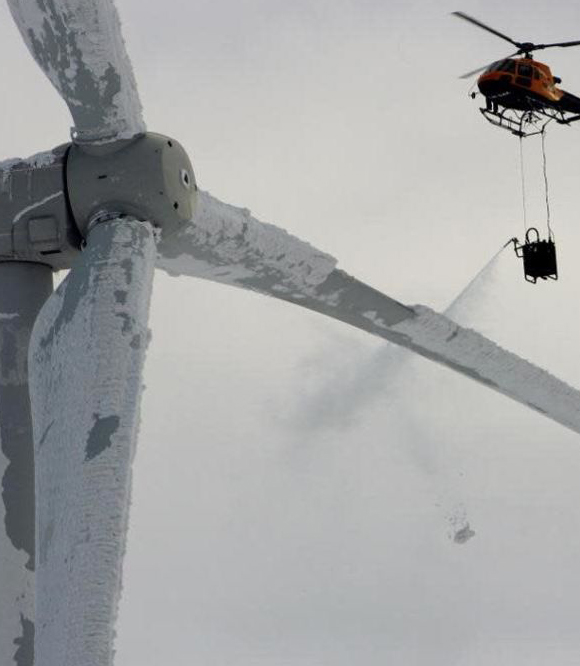 How Air Edge® Can Help

Keep your blades turning even in freezing conditions with heated air nozzles in the Air Edge® system to reduce downtime and create energy when it is needed most.

The goal of operating wind turbine plants is to keep their aerodynamic characteristics for as long as possible in line with their original factory conditions. With the expectation of the long service life of the renewable energy harvesting technologies, maintaining such conditions for 20 years is crucial, but it is demanding.

Wind turbine manufacturers are still lagging behind in tackling this problem. There have been some endeavours in this regard by retrofitting older blades with leading edge protection methods. These include tape, paste, epoxy and metal tiles. However, there has, until now, not been an effective protection method of the wind turbine blade leading edge.

Our breakthrough Air Edge® technology testing gives the solution to improve leading edge erosion rate in wind turbines by 47%. The Virtual Feathering system creates a unique cushion of air across the surface of the blades to give the blades another layer of protection, preventing damage from abrasion and erosion.

The figures below show the erosion rate on both test cases – with and without Virtual Feathering.

The figures below show the erosion rate on both test cases – with and without virtual feathering. As evident from figure below, a significant erosion rate exists across the leading edge of the wind turbine. This situation is more severe across the blade tip, where the tip speed is significantly higher. 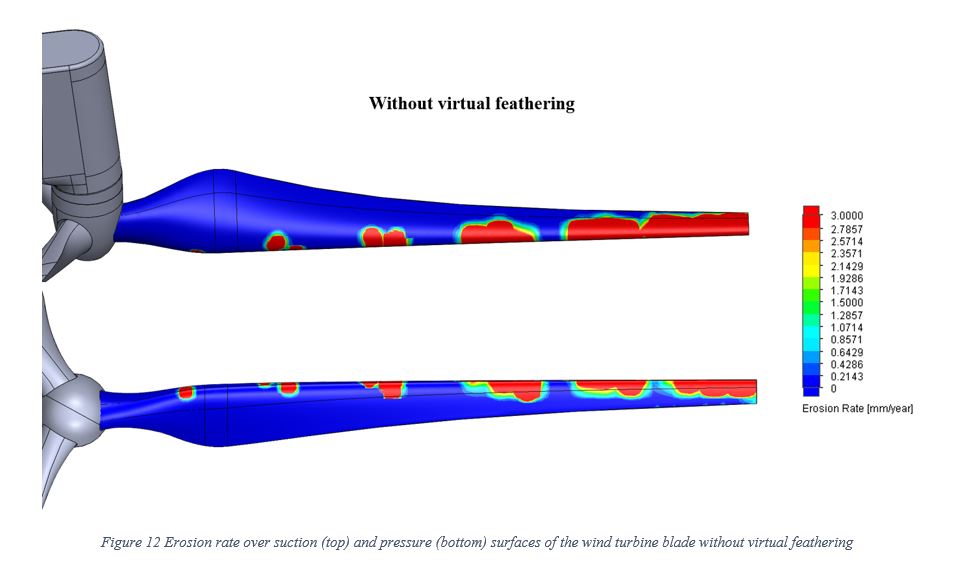 As evident from the figures, a significant erosion rate exists across the leading edge of the wind turbine. This situation is more severe across the blade tip, where the tip speed is significantly higher.

In addition to this, without virtual feathering, the erosion is not only limited to the leading edge but also over the suction surface of the blade where there is significant erosion. The situation is milder on the pressure surface of the case without Virtual Feathering.

On the contrary, for the case with Virtual Feathering (Figure 13), there have been remarkable improvements in the blade erosion rate. Due to the implementation of our technology, the majority of the erosion has been eliminated on the pressure surface, while the severity of the erosion on the suction surface is significantly reduced.

Overall, the affected areas have been reduced substantially as a result of applying the proposed Virtual Feathering concept to the leading edge of the wind turbine. 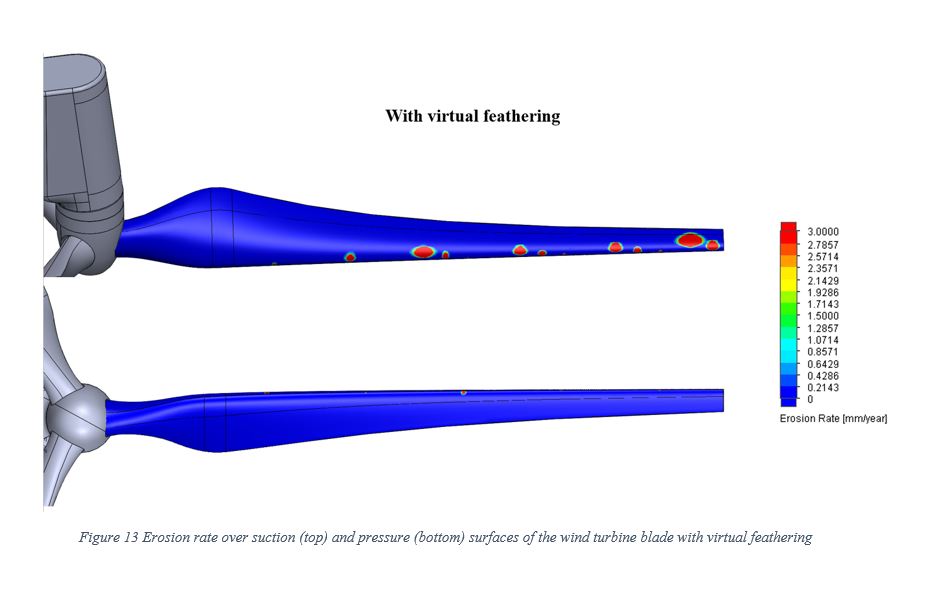 It is evident from the presented results that the proposed Virtual Feathering was an effective solution to the wind turbine erosion problem. It was possible to decrease the erosion rate of the wind turbine blade by about 47%. However, this should be noted that such improvement was achieved for the case of water droplets of a particular size and mass flow rate only.

The erosion rate can have higher or lower severity under snow or hail storms of different mass flow rates. However, from a relative perspective, we can conclude that Virtual Feathering can extend the service life of the wind turbines and reduce maintenance costs and alleviate safety concerns.

Ogab®’s Air Edge® technology has shown to be vital in preventing power outages from freezing weather conditions while also significantly reducing the level of erosion to the blade. All of this helps to reduce downtime, maintenance costs, outages and cost.

Get in touch today to find out more about how our Air Edge® technology can help you.